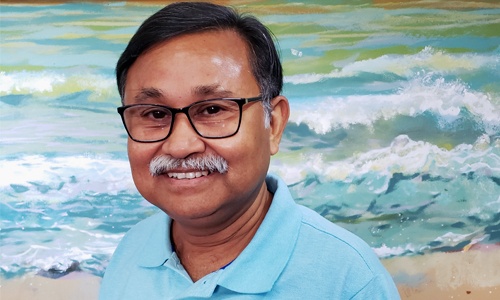 An essayist-researcher-children’s litterateur-translator-editor. Born: 27th march 1963, Dhaka. Education: S.S.C from Khilgaon Higher Secondary School in 1978. H.S.C. from Shahid Soharawardi College in 1980, graduation in Bengali literature from Dhaka College under the Dhaka University in 1983, post graduation on the same subject from the Dhaka University in 1984. Though at the beginning of his career he got some recognition penning children’s stories and poems but presently writes mainly social thoughts, research oriented works, commentaries on culture and criticism. He is doing research on children’s literature. Translation, transcription and reconstructive works are also there. Written, translated and edited books exceed sixty. During the setting up of the educational and cultural institution the world literary centre, he was working there for 17 long years. For a while he also practiced journalism. Besides this he also edited a quarterly Little Magazine named ‘Boier Jagat’ which dealt with criticism of books. Presently he is residing in New York with his wife, actress Shireen Bakul and under graduate son, student Shudipta Priyadarshan.