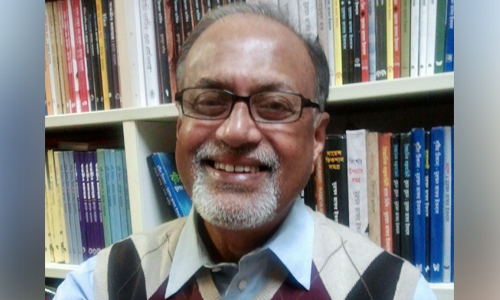 Mr. Jamaluddin Hussain was born in October, 1943. Hecompleted his early education at St. Placid’s High School, Chittagong and Chittagong Government College. He graduated in Mechanical Engineering in 1965 from the then East Pakistan University of Engineering & Technology, now BUET, Dhaka and completed Post Graduate Diploma in Advanced Industrial Management from The Netherlands in 1974.

Mr. Jamaluddin Hussain joined the then East Pakistan Industrial Development Corpration in 1966 as an Assistant Engineer. He left Government job in 1978, when he was a General Manager in Bangladesh Textile Mills Corporation.

Mr. Jamaluddin Hussain went into construction business in 1978 and was a Director of a large construction group Nirman International Ltd. He later started his own textile industy in 1986 and was in textiles and garment business till 2006.

Alongside his profession as an Industrial Manager and a businessman, Mr. Jamaluddin Hussain has been engaged in theater acting direction as a hobby and passion. He started amateur acting from childhood. He continued his theatrical pursuits at school, college and university and throughout his professional life. He is now a full time theater activist.

During the War of Liberation of Bangladesh in 1971 he was arrested and was put under surveillance by the Pakistan Army for pro- liberation ideals and cultural activities. He later managed to leave secretly his place of work and residence in Chittagong and managed to stay underground with his wife and two babies until the country was liberated.

As a theater organizer Mr. Jamaluddin Hussain was a Presidium member of Bangladesh Group Theater Federation, which is the umbrella organization of over 150 theater groups in Bangladesh. He was the founder General Secretary of Bangladesh Betar Televison Shilpi Songshod (Radio & Television Artists Association) and also President of Bangladesh Television Shilpi Songstha (Television Artists Association).
Mr. Jamaluddin Hussain was Chairman of the Steering Committee for overseeing the construction of the National Theater Complex, National Music Complex and National Art Gallery at Dhaka, Bangladesh. He was a member of the National Commission for granting autonomy to State owned Radio and Television. He was also member of National Grants Committee for Films. Mr. Hussain was the Leader of the Bangladesh Cultural Team to Turkey.

Mr. Jamaluddin Hussain has been awarded EKUSHE PADAK, the second highest National Award by the Government of Bangladesh, in 2013 for his achievements in the field of Art & Culture.