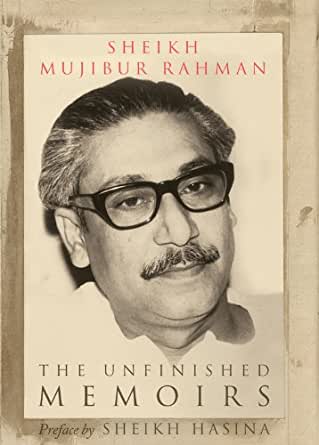 Insights from The Unfinished Memoirs

The autobiography of the country’s founding father, Sheikh Mujibur Rahman, presents a perspective of Bangladesh’s political history in the 1950s and 1960s, and the way his turbulent political life was shaped in those tumultuous days.

The Unfinished Memoirs indicates the making of Bangabandhu and the future father of the nation, as if Mujib as a political prisoner and a Bengali nationalist leader had travelled through the path of history he made in course of time.

His struggle while physically meeting his people and upholding their causes, was the struggle of the masses of the contemporary period. His recollections remind the readers of the crisis of political fundraising in this part of the world as he describes the hardship faced by the opposition political activists while supporting the election campaign of then student leader Shamsul Haque in a by-election in Tangail in newly independent Pakistan.

In the process, Bangabandhu Sheikh Mujib left for future generations and historians valuable references, clues, insights and of course his own political narratives.

Like some other politicians who travelled between jail and the free world, he wrote his diaries, which eventually turned into this book, and unless he did so, the readers and observers of Bangladesh would have missed a definitive perspective that says how a political Bangladesh came into being.

And many of the questions he tacitly raised remain valid today. Mistrust among the politicians and conspiracy and talks of conspiracy are something that Sheikh Mujib was disturbed. These feature prominently in his book.

It is the reflection of a post-colonial society, especially moves and activities that defined early decades of Pakistan, when Bangladesh was a part of it. The difficulties faced by the democratic political parties like Awami League and by politicians determined the destiny of Pakistan and it is eventually Mujib who led the process and war of Bangladesh’s liberation.

“What the book does contain is of indisputable worth: it shines a light on crucial aspects of the ground realities that led to the split of Pakistan into two in less than 25 years of its creation,” wrote Hindustan Times in its review of the book. Also, it shows his understanding of realpolitik and capacity to read the people’s pulse.

The book is full of political characters, some of whom were celebrated and others who would have gone into oblivion, had he not mentioned their names.

However, in his narratives, whenever he named a fellow politician, be it from his party, side or adversary, he mostly addressed him as ‘saheb’ or Mr - something that proved his respect for all of them as politicians and as individuals. Such respect is rare these days.

Mujib candidly criticised political decisions or moves of two of his most respected seniors - Maulana Abdul Hamid Khan Bhasani and Husein Shahid Suhrawardy but ultimately he had never lost his respect for them.

His political beliefs and pursuit of his goal has given him a towering height exceeding all others around him. In his speech, as contained in the book, he delivered in the Constituent Assembly of Pakistan in 1955, a young Mujib said: “Sir, you will see that you want to place the word ‘East Pakistan’ instead of ‘East Bengal’. We have demanded so many times that you should use ‘Bengal’ instead of ‘Pakistan’. The word ‘Bengal’ has a history, has a tradition of its own. You can change it only after the people have been consulted….. So, I appeal to my friends on that side to allow the people to give their verdict in any way, in the form of referendum or in the form of plebiscite.”

Bangabandhu Sheikh Mujib was also a family man who had enormous love for his father, mother, wife and children. While staying in jail, he penned down an experience: “Hachu (now prime minister Sheikh Hasina) was playing and often calling me as “Abba” (dad). [Little] Kamal was asking her, Hachu apa, can I call your father Abba?… I told him ‘I am your Abba too’… Someone’s own son forgets him if he does not see him for a long time. When I went to jail, he was only a few months of age. Who will say how heinous is the act of confining someone on political grounds and without trial and keeping them isolated from children and relatives! Human beings become blind with self-interest.”