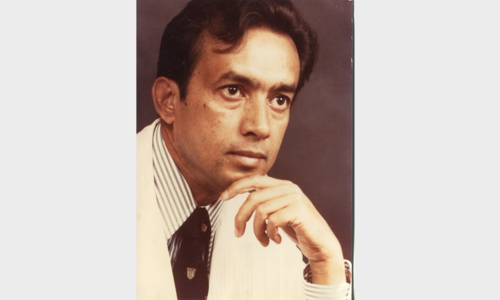 Dr. Samar Sircar was born in Bhawanipur, Calcutta to an affluent family during British Raj. His eldest brother was educated at Santiniketan under the tutelage of Rabindranath Tagore. Early in his childhood, circumstances changed with the family business and the health of his father. This led to young Samar being sent to an all-boys boarding school in Deoghar – Ramakrishna Mission Vidyapith. It was there that the monks imparted a diverse education not only focused in academia but also culture, art, charity and spirituality. He entered the school when he was seven years old and would continue the affiliation even when he was studying medicine at Kolkata Medical school in Kolkata. He once remarked the number of hours spent in devotion, and spirituality during his formulative years is what created the foundation for his lifelong passion for culture, art and humanity.

After becoming a doctor in India, he decided to pursue an even higher degree, so off to England he went by ship. He only had four pounds in his pocket and no family in England, just good friends. Soon he found a job, and then another job, eventually making his way to London. He was finding a path, at the same time studying for the esteem surgeon’s degrees, Fellow of the Royal College of Surgeons in both England and Scotland. Even while forging his way as a surgeon in a foreign country he still found time to promote and foster Indian culture wherever he went. He gained a reputation for being a tabla and khanjuni player. He would often get called on stage to accompany visiting artists at cultural programs. He even had the great honor to accompany Hemant Kumar, the renowned Bengali singer, when his tabla player cancelled.

In London, Samar entered a busy period where he had to start from the bottom and work his way up. During that period, he got married surrounded by group of Bengali friends, fathered two daughters, and became a Consultant Surgeon – the highest job for a doctor in the country. He soon became restless for a new experience and set his eyes on America. Samar packed his home, sold his car and arrived in Boston with a wife and two very young children. There he worked as a Fellow in Orthopedics at Massachusetts General Hospital which was in close proximity to MIT. This allowed him to attend Indian concerts, puja’s and other cultural events. Following his fellowship, he moved to Norfolk, Virginia. There he spent three years in a residency program. He was more experienced at times than most of the doctors who were above him, but he remained humble. In Norfolk, he found a group of Bengali families, and organized the first Saraswati Puja. After he finished residency, he was offered a job as a partner in a group in neighboring Chesapeake Bay, but he opted for California hoping it would provide more exposure for culture and diversity, especially now that his family was increased by one more daughter.

He had no job offer but armed with his certificates and a Mazda station wagon, he drove his young family to California with a dream. At the last moment a friend was able to negotiate a four-month deal, which in return for research he would receive boarding. While he was working, he was also viewing perspective long term jobs. He received an offer join a group which was lucrative, but the one which caught his eye was being an assistant Professor in Orthopedics at UCLA. Money was never what motivated him, it was also where he could do the most good, so he joined academia, and stayed there for more than ten years.

He secured his family in a small but comfortable home in the suburb and started to explore cultural activities. He found a local Vedanta and Hare Krishna temples and made it a point to take the children there over the weekends. Finally, he found what he was looking for during his entire journey through the country, a group of Bengali families who were seeking the same goal. They were all looking for a way to bring a little bit of their culture to this new country. A group was soon formed, and they put together a small organization Bengali cultural organization and Sunday school, Dakshini.

Most of Samar’s Sunday’s was dedicated to ensuring the students were present, they had books and of course incentives like a steady supply of snacks. They sponsored Bangla Sammelan, with lots of youth involvement. During Puja’s he would gather all the youth for Aarti, hosted debates, auctions, poetry readings, and made sure it was all well attended. He was also a prominent figure in the Bengali Association of Southern California and the Federation of Indian Associations. There he helped develop programs and annual events like Independence Day celebration, Holi in the park, even a float in the Rose Parade. If that wasn’t enough, he also helped establish a local Indian community in his own neighborhood, Indian Association of Palos Verdes. This organization was created solely to showcase everything beautiful to about India to the local community. He was a member of many multi-cultural organization. Although he held the title of president at varying times at all these Indian organizations, his focus was always making sure the youth were engaged and involved. He made affiliation with Bangldesh community and would drive his daughter weekly to teach the youngsters, and whenever they needed a big brother, he was there.

Samar’s passion for his culture and art did not stop with just his community, he brought it to mainstream venues at any opportunity he could find. He hosted 140 years of Tagore at UCLA. He facilitated a Satyajit Ray film festival at USC, a Mela Day celebration at Palos Verdes Art Center, and Poem, Poets and Poetry events. He was instrumental in sponsoring many Indian artist obtain their visas to come and perform in the US from his non-profit organization, Art India.

It wasn’t just the public organizations or committees where he showed his appreciation and dedication to the country where he was born. He did it every day in very private ways. A visiting flautist needed money to buy a ticket back home and would not accept charity, so Samar bought all his bamboo flutes so he could buy his ticket. As busy as he was as a surgeon, he was one of the very few doctors who did house-calls to community, as needed.

I am proud to have known him. He died on the Ides of March under the light of the bright Holi moon shinning in the sky. He had his entire family around him, and fitting to what he was Rabindra Sangeet was playing in the background when he drew his last breath. Tagore wrote, “Death is not extinguishing the light; it is only putting out the lamp because the dawn has come.” The light still shines inside all he touched during his life.