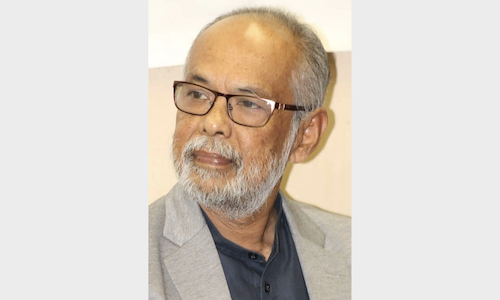 Ferdous Sajedeen was born and raised in Bangladesh. He came to America in 1975 with an immigrant visa as a pharmacist. He began his writing career editing for Shundorom, a Bengali “little-magazine” he published during his college days. Shundorom was highly acclaimed and featured many articles from various renowned Bangladeshi authors. He also directed and wrote many scripts for various radio programs. From 1972 to 1975, he hosted a radio talk show for Bengali youth called “Nabin Kantho”.

Since the inception of the Bangladesh Society of New York in 1975, he became a very active member to promote Bangladeshi culture through various literary and cultural forums. In 1984, he wrote and directed a play on the great Bengali poet, Kazi Nuzrul Islam, which was the first Bengali televised drama to be aired in North America. In addition, he was the associate editor of the weekly newspaper, Amar Desh, in the early 1990’s. He writes regularly for local and national Bangladeshi newspapers.

His writing is influenced greatly by his travels. His occupation as a pharmaceutical consultant has brought him to many diverse places throughout the world. His first novel, Taubu Anonto Jage, was published in February, 1994.

Ferdous Sajedeen mainly writes about immigrant life in North America, as well as the lives of the people back home in Bangladesh, finding parallels between the two. Through his writing, he has tried to come to an understanding of the relationship between the past and present generations in regards to Bengali and American culture, traditions, and ideas, ultimately connecting the human race.

He currently lives in Merrick, Nassau County, NY, with his wife and son.